I have been reviewing laptops for years, and although I won’t say I am bored, the truth is my excitement for new notebooks has gone down. It’s not that brands aren’t experimenting with designs and features, they are, but the level of innovation has slowed a bit. To prove critics like me wrong, Lenovo thinks its ThinkPad X1 Fold, the world’s first foldable laptop, is a showcase device that might get mainstream status in the future. The ThinkPad X1 Fold isn’t about speed or graphics, it’s about the folding screen tech and how it can change the way we use a traditional PC. Two weeks back, I received the X1 Fold, and since then it has been my personal computer. Here are the good and bad aspects of the Lenovo ThinkPad X1 Fold.

I have always liked ThinkPad laptops. They have a macho build and the minimalist design language combined with black exteriors make them different from other business laptops. The ThinkPad X1 Pro is a handsome-looking device; it feels superior whether it’s closed or open. The entire laptop is encased in genuine leather, and that shows the choice of materials being used to design a device that will mostly appeal to golf-playing executives and CEOs.

The device smells good, after all, being a natural material, leather has its own unique smell. But the material has a tendency of being scratched or scuffed over time. I don’t know what the outer case looks like as the leather starts aging. Anyway, a built-in kickstand adorns the back portion of the X1 Fold. Although useful for watching movies or video chatting with colleagues, the kickstand doesn’t feel sturdy as the one found on the Surface Pro. Lenovo needs to come out of a way to make the kickstand snappy and less flimsy. 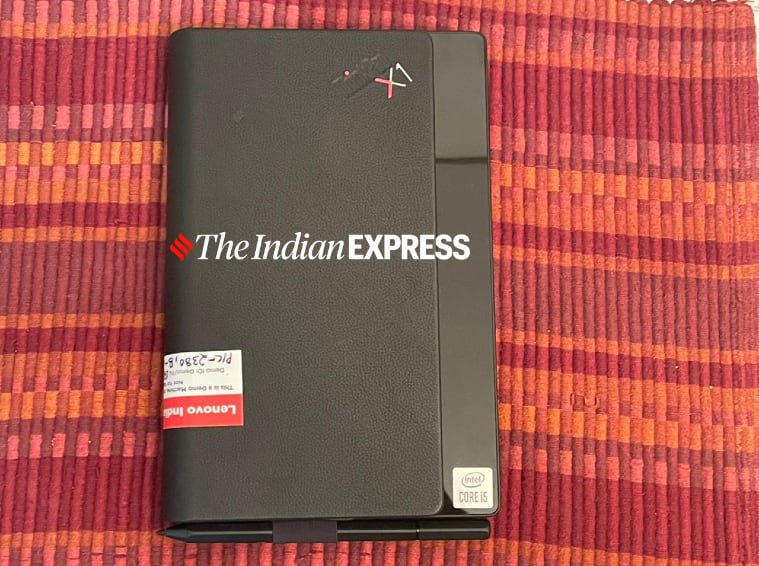 The leather exterior of the device gives it a premium look. (Image credit: Anuj Bhatia/Indian Express)

Moving on from the kickstand, the device features two USB-C ports. When used in tablet mode (unfolded), one of the USB-C ports can be found on the lower-left corner, while the other is placed on the bottom edge. Both the power button and volume buttons sit on the upper-right side of the device. A model with the nano-SIM tray will also be available complete with 5G connectivity. A webcam, meanwhile, can be found on the left of the center in the bezel around the screen. My issue is the orientation of the webcam on the device. See, if I use the X1 Fold in laptop mode, I will show up as if I am standing on the side in video calls. The problem is the camera is placed on the right side of the display, though I had no issues attending Zoom calls when I used the X1 Fold in tablet mode. Another thing that irked me about this device is the availability of a mere two USB-C ports. Since this device is pitched as a proper work machine, I was expecting the X1 Fold to have more USB-C ports. The problem is that if I need to use a keyboard and USB mouse while charging the X1 Fold, I am left with only one USB-C port. 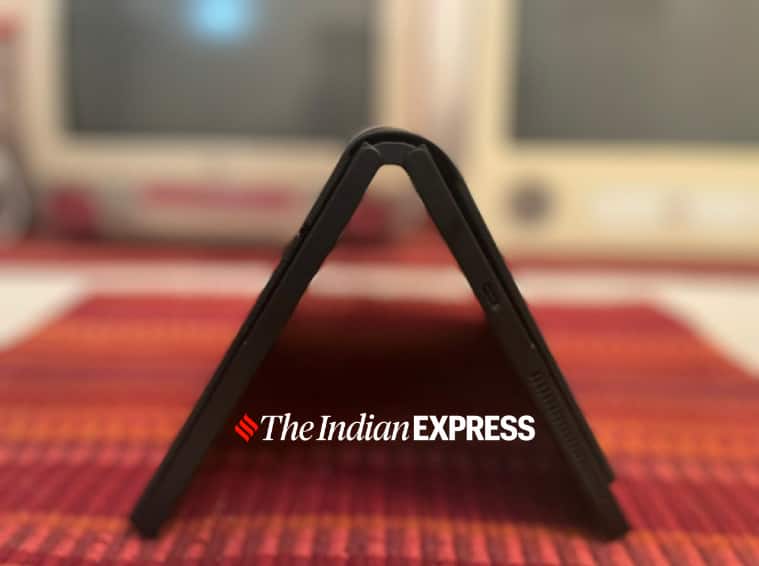 While I liked the robustness of the device, I am not so sure about the screen and the unique hinge mechanism stays the same as Lenovo promised in the long run (It claims the X1 Fold underwent the same MIL-STD 810H testing as other ThinkPad laptops). The device’s bezels are large and have a rubbery feel to them, though I think they help protect the display.

That said, the X1 Fold is an impressive device from the design point of view: the X1 Fold opens and closes like a book, and thanks to a foldable screen, the device becomes a13-inch tablet. More impressive is how small and compact this device is. I can carry the X1 Fold in a small bag and won’t notice the weight. Though the X1 Fold isn’t as light as shown in Lenovo’s product videos. The device still weighs 1 kg to be precise.

The ThinkPad X1 Fold is a new type of computer, and that one thought itself is exciting. The device is the size of a large paperback when closed, but reveals a 13-inch OLED display when open. The way it opens up and becomes a tablet is mindblowing. So when you unfold it, the entire display becomes flat, just like an iPad Pro. Use any Bluetooth keyboard and mouse (or take advantage of the built-in keyboard) and start using the device for work. In that scenario, the kickstand works brilliantly. I mostly used the tablet mode to write and file stories. 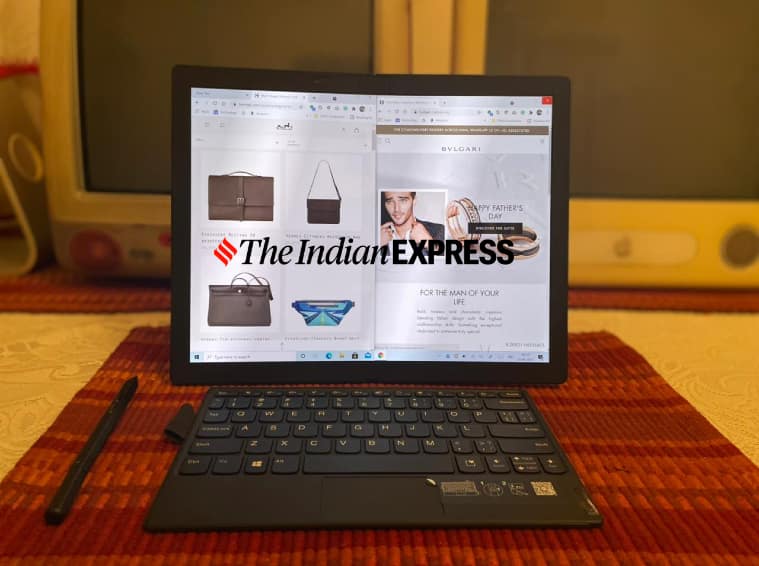 But since this is a foldable device, you can fold the screen and it comes with a mini laptop. The top half of the screen can be used to attend Zoom calls, while the bottom half of the screen can either be used to browse the web or take notes. You can also use Lenovo’s Bluetooth keyboard (more on that later) which easily snaps onto the device via magnets half the screen. As was the case with the original Samsung Galaxy Fold, I didn’t find the crease down in the middle too much of a hindrance, because it was barely visible when viewing photos or watching a video.

The touchscreen measures 13.3-inches diagonally, with a resolution of 2,048 x 1,536 pixels. Although maximum brightness is limited to 300 nits, the 2K OLED panel is really sharp and bright. The display is bright indoors, but not that much outdoors. Touch responsiveness is okay, and the supplied stylus also works fine. But, of course, what separates this type of plastic OLED display from others is that it has folding capabilities. This is the coolest part of the ThinkPad X1 Fold. But at the same time, one has to be extra careful using a device like the X1 Fold. Similar to the Galaxy Fold, marketed as the first foldable smartphone, the display on the X1 Fold is covered in a protective layer. 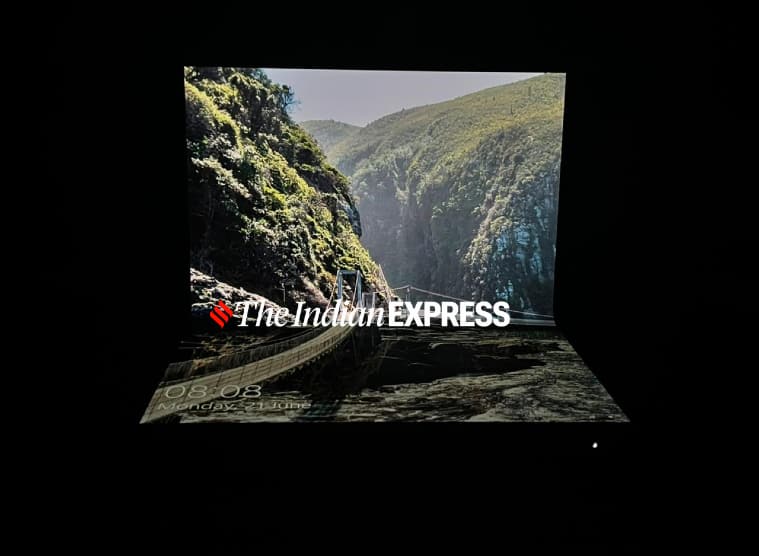 You can hardly see the crease in the center of the screen. (Image credit: Anuj Bhatia/Indian Express)

There is always the fear of small dirt particles damaging the display, though Lenovo has taken steps to minimise the air gap when the device is closed. The screen is a fingerprint magnet and requires frequent cleaning. In the course of my review, I opened and closed the device innumerable times. I have had no issues using the device, and the X1 Fold certainly appears better to hold. While some may find the X1 Fold unusual to use, it definitely feels well-made.

My review unit came with the mini Bluetooth keyboard and Mod Pen. As I have mentioned previously, the keyboard attaches to the bottom part of the display, and the pen has a special loop holder on the keyboard. Look, the keyboard isn’t bad per se, it is basically cramped but it’s still better than the software keyboard. The keyboard also has a small built-in trackpad but it’s difficult to use. One big qualm is that when you attach the keyboard, the 13-inch display reduces to a small screen which is not ideal for me to work on. It might look fine on paper, but in reality, I wasn’t able to write lengthy reviews/stories on the X1 Fold. Maybe it’s fine for replying to a quick email but the small(ish) keyboard along with a touchpad does not elevate the experience. 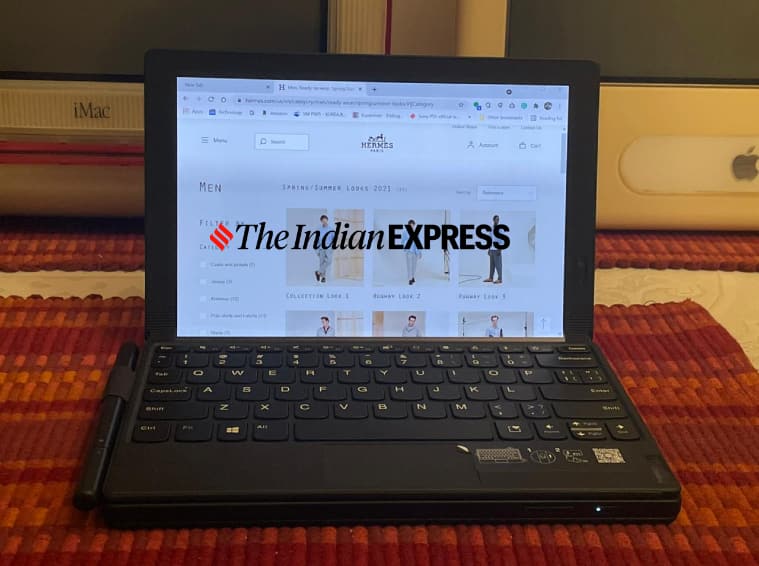 Don’t expect the X1 Fold to win awards for the most powerful laptop on the market and I don’t think Lenovo intended to make a device that did. The device uses Intel’s Core-i5 hybrid processor, which has an ARM-like architecture. The core aim of this chip was to power mobile PCs with long battery life. I mostly used the X1 Fold for browsing the web, writing stories, and attending video calls. I didn’t bother to run speed tests or edit video files on this machine because that isn’t what the CEO of a company would be doing on the X1 Fold. 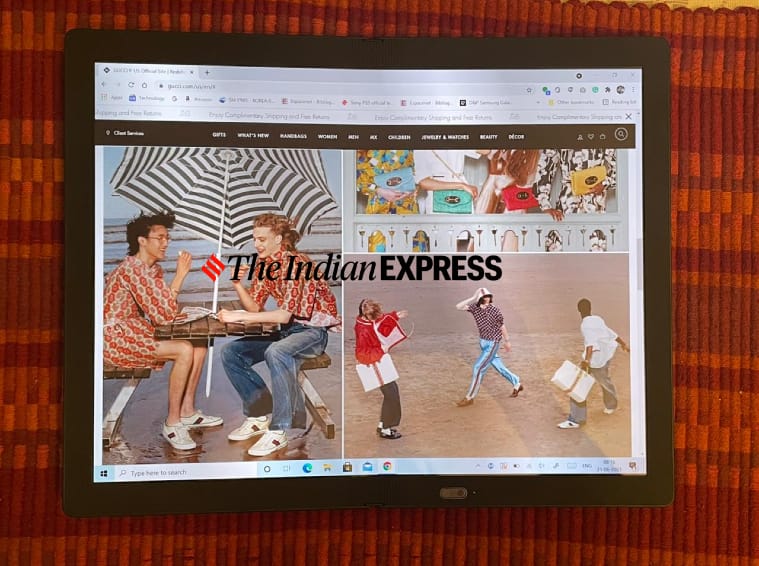 I know there are laptops several times faster than this computer but they are unlike the X1 Fold, and that is the point. It’s a joy to use the X1 Fold. The only thing that would be nice to have would be more ports. Everything else has either met or drastically exceeded my expectations. 8GB RAM is fine for this machine and so is a 512GB SSD. The battery lasts around 5 hours on a single charge which is shorter than Lenovo’s claims of 8.5 hours. Mind you, the X1 Fold lacks any form of Windows Hello compatibility. It only has a 5MP webcam – and there is no fingerprint scanner. The speaker’s quality is surprisingly good, though. The device has fans but they only get loud in installing Windows updates. I am not against Windows 10. It’s a fantastic desktop operating system but it’s not made for a device like the X1 Fold. Since the X1 Fold isn’t designed for Windows 10, Lenovo had to add the Mode Switcher to use the device in different ways. Mode Switches appear whenever you want to switch between different viewing modes. Although it works well, I would not call the experience smooth. For instance, jumping from laptop mode to tablet mode takes time. This is the basic problem with the X1 Fold, unfortunately. I would not entirely blame Lenovo; it’s not the company’s fault. Microsoft should be held accountable because it has not designed the software for a futuristic product made by its top OEM partner. 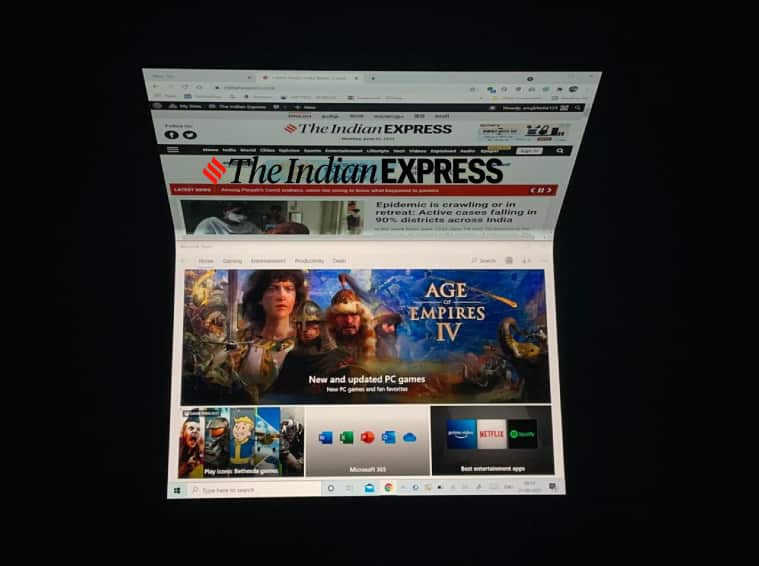 Lenovo ThinkPad X1 Fold review: Should you buy it?

No. It starts at Rs 300,000, which is way too much to shell out on a laptop unless you are a crazy rich person. It’s not worth the money, but it’s worth looking at a device that sets the foundation of computers that have unique foldable designs. 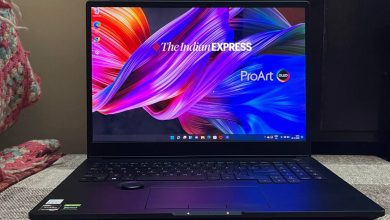 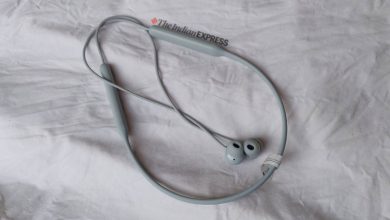 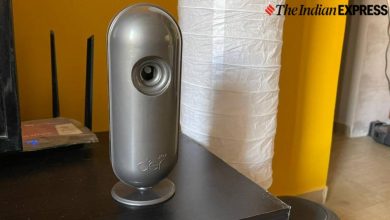